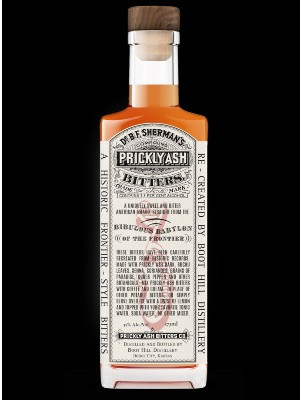 Boot Hill Distillery’s story begins with combining five generations of sustainable farming and quality, transparent distilling to create whiskies and other spirits that are uniquely our own. Founded by Hayes and Roger Kelman in 2014, as an extension of their own multi-generational farms, they saw opening a distillery as a way to add value to the corn, wheat, rye, and barley their family has grown for generations. Western Kansas’s first craft distillery came to fruition in Dodge City, KS when a historic 1929 city building needed rescue from the wrecking ball. Atop the infamous outlaw cemetery bearing our namesake, our distillery, housed in the town’s historic municipal building, sees a different kind of spirit inhabiting Boot Hill today.

OUT OF PRODUCTION SINCE THE 1910s, PRICKLY ASH NOW FINDS NEW LIFE AS UNIQUELY SWEET AND BITTER AMERICAN AMARO PRODUCED BY KANSAS’ ONLY SOIL-TO-SIP DISTILLERY.

Featuring such unique botanicals as prickly ash bark, buchu leaves, senna, coriander, grains of paradise and cubeb peppers - Prickly Ash Bitters' unique character and powerful burst of flavor is sure to spice up coffee, beef up a spritzer, or can be mixed with your favorite vodka, gin, whiskey, tequila, rum or any other spirit for a earthy, bitter kick.

NOSE - Earthiness with hints of root vegetables. Heavy pine and cooling menthol round out the end.

NEAT - Sweet sugar right up front followed by a powerful wallop of bitterness. Complex hints of mint and citrus dominate the center, followed by a slight numbing sensation across the tongue.

ON THE ROCKS - The addition of ice makes the Prickly Ash Bitters significantly brighter, and softens the intense hit of bitterness, forcing it to take a back seat to the complex notes of the other botanicals.